It was my first official day of the Maurice Saxby mentorship today and I met my mentor Hazel Edwards in her eastern suburbs home.

Hazel in person proved much like her public persona – a human dynamo. She greeted me warmly, complimenting me on my punctuality and ushered me into a sunlit sitting room. Before I’d even sat down, she warned me that her comments would be blunt – she wanted me to get the most from her critiquing.

I was surprised that my story formerly known as The Floordrobe Phantom (now simply Floordrobe on her advice) was her favourite of my three picture book offerings. She loved the floordrobe concept – something she said every kid and parent could relate to. She then went through the manuscript line by line. She liked my use of threes – floordrobing is like bungy jumping, surfing or sky-diving. But she had concerns about the names I’d used for the children – a no-name gender neutral main character has broader appeal, she said. And she pointed out passages that needed dramatization.
Hazel also went briefly through my other picture book manuscripts (I submitted three in my mentorship application) recommending one as worthy of development into a longer work and the other as having series potential. I must admit the idea of a series about a character called Haggis McStink is quite appealing!
We finished the session with Hazel talking about the need for self-promotion. I was already aware of the need to get cracking on these aspects and felt too ashamed to admit that in a fit of despair last year, I had put my writing ambitions aside and taken up a proper job. Of course, the offer of publication for Ferret on the Loose arrived about two months later.
Now I feel like all these opportunities are opening up and I’m seriously lacking the time to take full advantage of them.
So, on my to-do list (with Hazel’s recommendations):
–          * Create an author website/blog (which is probably NOT this dog blog)
–          * Make author business cards
–          * Join the ASA (Australian Society of Authors) and/or SCWIBI (Society of Children’s Book Writers and Illustrators)
–          * Create a profile on Linked In
–          * Start tweeting
–          * Contact local papers about Ferret
Later…

Helen Chamberlin – publisher at Windy Hollow who coordinated the mentorship program – met us ‘mintees’ – the others were Neridah McMullen, Nadine Cranenburgh and Laura Wilson – next at Books Illustrated in Middle Park.
I remembered this wonderful book shop from its former home at GasWorks in Albert Park but it is now located in a non-descript terrace house on Beaconsfield Parade. Hence I drove past it the first time, panicking because I was only just on time and didn’t have time to not find it. On my second drive around the block, the outside name plate caught my eye and I managed to park almost directly outside.
The two Anns – illustrator extraordinaire Ann James and former teacher-librarian Ann Haddon – are in possession of a treasure trove of children’s books. It was like stepping into a Willy Wonka’s chocolate factory of children’s books – beautifully displayed picture books, rows and rows of the latest chapter books and gorgeous original illustrations adorning the walls. If money was no object I could’ve gone crazy!
After our guided tour, we sat in a cozy dining room, with the Ann’s two dogs keeping us company in their baskets by the gas fire. As we chatted I became aware that Ann James was the Ann James (so much for doing my research!) and was a little over-awed.

Ann has illustrated a lot of Margaret Wild’s books – one of my favourite picture book writers – and their joint The Midnight Gang was one of mine and my daughters’ favourite bedtime stories.

It was fascinating talking to Ann about how she approaches a text and what she likes and doesn’t like from authors. For instance, she was saying how much she enjoyed receiving Gillian Rubenstein’s Dog in, Cat Out manuscript. 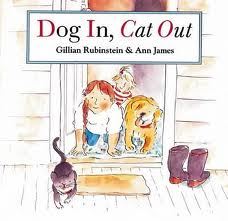 For those unfamiliar with the book, it’s aimed at babies and toddlers and reflects the different times of day in a typical young child’s life by when the dog is in and the cat is out. There are very few words in this picture book but Ann said she adored the challenge and the opportunity for her imagination to run wild. She said she studied the text to such an extent that she’d be like “hmm, there’s a full stop there, what does that mean?”

She also spoke about the pacing of picture books and showed 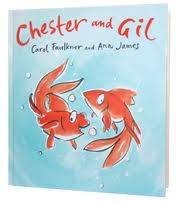 us the original paintings from one of her most recent books Chester and Gill. She explained about an error in the book to do with pacing – ie, the words preceded what happened in the pictures.

All in all it was a very enjoyable afternoon and, in spite of our comparative artistic poverty, none of us were able to leave without buying a book or two.